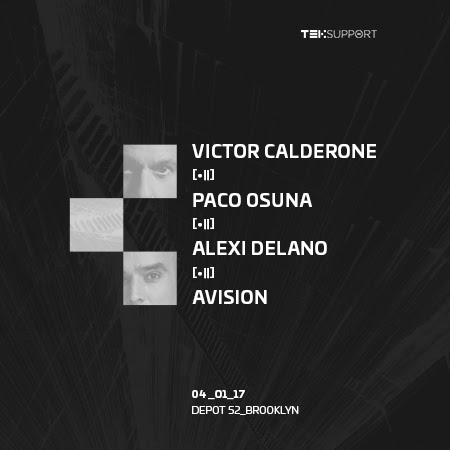 Teksupport is excited to make tickets available for their April 1, 2017 warehouse event. Celebrating legendary Victor Calderone’s 50th Birthday, the Brooklyn warehouse series has prepared an event for the record books. Apart from yet another musical journey well into the wee hours of the night, courtesy of Calderone himself, we have invited Mindshake Records head honcho Paco Osuna, as well as Alexi Delano and Avision to partake in the festivities. Bringing Calderone back to his home base in Brooklyn, where his career began, the event will undoubtedly grant attendees with a memorable night. Tickets are on sale now and available for purchase here: http://bit.ly/VC-Teksupport

The words “world-renowned” and “influential” get thrown around all too often these days, to the point of almost becoming cliché. While few artists actually measure up, all it takes is one look at Victor Calderone’s 20+year track record and the facts speak for themselves. From past collaborations with some of the biggest names in pop like Madonna, Sting and Beyoncé Knowles, to more recent collaborations with the likes of Adam Beyer, Richie Hawtin, Nicole Moudaber and Paco Osuna, Victor’s constantly evolving approach and contributions to the worlds of house and techno music has earned him a place firmly at the top among the world’s most prolific DJs and producers. While his accomplishments as a remixer, producer and DJ are well known among those in the scene, Victor understands and appreciates the importance of continually evolving. He has reinvented his musical style and now treats listeners to an edgier darker sound. An influential and inspirational talent, Victor has entertained millions of people, generously donated to charitable causes and earned the utmost respect of his peers, all while boldly pushing the universal limits of originality and ingenuity.

Teksupport has brought a breath of fresh air to New York City nightlife, inspired by the artistic originality present in the world of underground, and it’s overall contribution to the evolving culture of New York and the creative community behind it. Teksupport has already taken the city by storm with Circoloco, 10 Years of Diynamic, Eric Prydz, Luciano and many more.