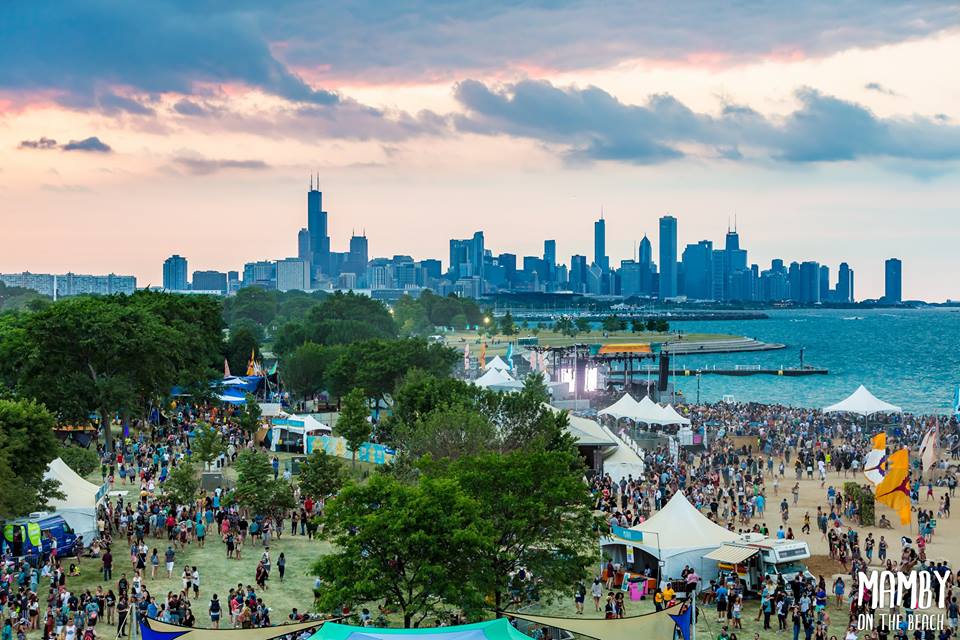 For two years in a row, Mamby on the Beach has taken over Oakwood Beach in Chicago during the 4th of July weekend. It is not an easy festival to explain, and it is completely different than your typical ‘EDM’ festival. There are no kids running around trading kandi bracelets, and we also haven’t seen any neon t-shirts with prints such as ‘RAGE’ or ‘PARTY WITH SLUTS’. Not that there is anything wrong with that, but it is one of the reasons why we love the vibe at Mamby so much.

There is something about the beach which makes the Mamby experience completely different than any other festival. We have attended many major festivals in the United States, but nothing can quite compare to Mamby. The lineup isn’t as beefy as other fests, there aren’t nearly as many stages, and it’s nowhere near as crowded as EDC or Ultra – but that is just what makes Mamby our favorite Chicago festival. There are carefully crafted decorations, delicious food from various vendors, nutritional workshops, volleyball courts, and more! The environment curated by React Presents proves to be just what people are looking for during the 4th of July weekend, and the best thing is that no matter what kind of music you’re into, they have something for you.

Diversity is a word often associated with Chicago, and looking at Mamby on the Beach, and the lineup provided, it reflects that perfectly. The best explanation of Mamby which we come up with would be a ‘laid back beach party’ – with very good vibes. The party goes on until 10p.m., but for those that want to go extra hard, there is a plethora of after parties scattered all around Chicago.

On the first day of Mamby, we jumped from stage to stage. Seeing Thomas Jack, Shiba San, Tycho, Atmosphere, Milky Chance, and Tale of Us. It was our first time seeing Thomas Jack, and we really enjoyed the time slot and stage selected – it matched up perfectly to his feel good music. Tycho was one of our favorite acts, playing a mix of ambient music combined with synths, melodies, and vocals. Shiba San had the MixMag DJ Tent bumpin, with his signature bass house sounds, but Atmosphere on the Beach Stage has to be our favorite Saturday performer, and one of our favorite highlights of the festival.

On Sunday, Chicago native, Lupe Fiasco, played on the Park Stage, had the crowd very involved in his performance, and even brought out Matthew Santos during his set to sing “Superstar.” The artist also took time out to speak to his fans about making efforts to decrease Chicago’s murder rate. We left Lupe a bit early to get to the Beach Stage, where everyone was rocking out to Chromeo’s funky disco sounds with an amazing backdrop of the Chicago skyline. We finished off the Sunday with some badass techno beats provided by Loco Dice at the MixMag DJ Tent.

Overall, we had a great time at Mamby on the Beach, and we cannot wait to see what React Presents has in store for Oakwood Beach in 2017.

Mamby On The Beach: Day One Recap