EDM Bangers
Share on Facebook
Tweet on Twitter
Janus Rasmussen of Kiasmos fame, is currently trying his hand at solo production and has shared the second track from his upcoming album Vín which is set for release on the 29th of March via Christian Löffler’s Ki Records. ‘Lilla’ (meaning purple in Faroese) follows his debut single ‘Green Wine.’
Growing up, music was an important creative outlet for Rasmussen. He and his friends would regularly come together to play music in their free time, using extremely primitive software on computers that were constantly crashing. Even though this process would seem frustrating, Janus Rasmussen explains that “it’s amazing how stubborn you are as a kid, nothing will stop you from doing what you love.”
Currently based in Reykjavík, Iceland, Rasmussen has been hard at work creating the new album. Drawing influence from the work of acts such as Radiohead, Aphex Twin and Leonard Cohen, he says of the process “I often work really quickly and I tend to be drawn to really strange ideas. I have this kind of obsession with finding something that really should not work and make it work. It’s very satisfying. ‘Lilla’ means purple in Faroese and it also happens to be my favourite colour. I thought the song sounded very ‘Lilla’
and the name just kind of stuck to it. It’s such a lighthearted song and that connection simply felt natural.” 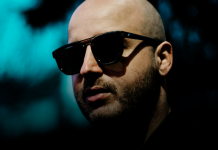 RL Grime – Because of U