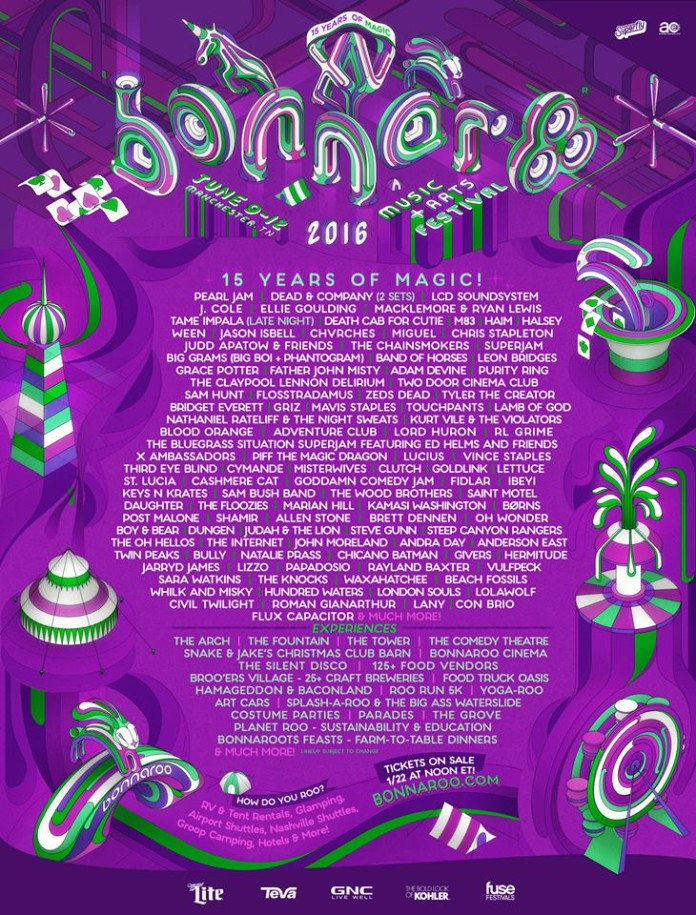 In case you missed it, Bonnaroo’s 2016 lineup was announced earlier this month and it is phenomenal.

2016 marks the 15th anniversary for the Nashville festival. For the occasion, Bonnaroo created a fierce lineup with newcomers as well as artists that have graced the festival before.

Bonnaroo did a great job offering a variety of music genres for their festival goers. In attendance this year you will find J. Cole to provide the hip-hop feels, Leon Bridges for the old school music to soothe your soul and Tyler The Creator for the those rap vibes.

The list of must see artists continues though,  there’s The Chainsmokers, Flosstradamus, Zeds Dead, Adventure Club, GRiZ, RL Grime, Cashmere Cat, Keys N Krates, Hermitude, Oh Wonder, and Marian Hill. I could go on, but you should check out the lineup yourself. As my eyes moved from one name to the next I keep thinking to myself, “Not uh, them too? THEM? Wait, them too?!” Just looking at the lineup gives me butterflies in my stomach. You can check out the full Bonnaroo 2016 lineup here.

The lineup is truly amazing and the best part is there are still more artists to be announced. Depending on who else is added, I may go as far to say that personally the Bonnaroo 2016 lineup is the best I have seen to date.

That being said, I HAVE to go. If anyone wants to help a girl out with the funds for a tickets, hmu. Lol.