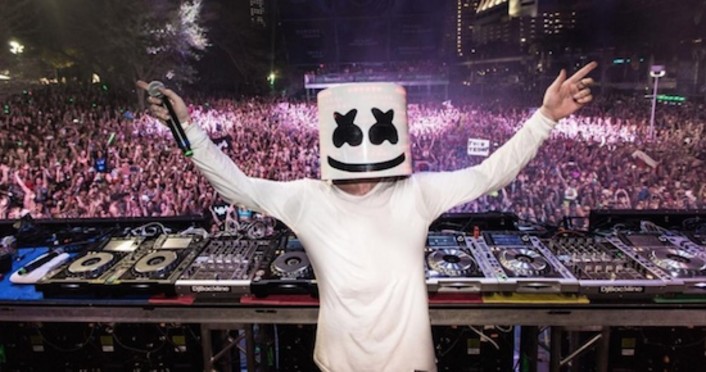 Marshmello
The man in all white with the large marshmallow head has been all the rage in the EDM scene this year. Marshmello, a DJ and producer of future house, progressive house, and bass, is making his way to the top and his gained an amazing response and new found fame the last two years.

He first got recognition from releasing his first single titled Wavez through Soundcloud, and continued to release more songs which caught the eye of many well known DJ’s, and everyone knew Marshmello. He is also popular for the many remixes he produced of major songs such as Jack U’s Where Are U Now and Adele’s Hello. He released his own full length album titled Joytime in early 2016, and it was a chart topping hit. He has since toured and played major gigs including Ultra, Electric Daisy Carnival New York, and Las Vegas. He even has his own “mellogang”, referring to his super dedicated fans.

What keeps him even more intriguing is that he keeps his identity completely hidden with his marshmallow helmet, which make us wonder, who is Marshmello? Many were surprised when he pulled a major prank at EDC Vegas, trying to convince the crowd that his identity was in fact Tiesto, as he took off his helmet during the set. Although it was not actually Tiesto, many rumors say that he is a DJ named Dotcom, but his identity still remains anonymous.

Regardless of who Marshmello is, he is continuing to amaze us all with his creative music and incredibly impressive live sets. We have a lot to look forward to with him in the upcoming months, including many tour dates from now into 2017. Keep a look out for him and maybe even the reveal of his identity. Get to know Marshmello by checking out his songs and live sets below.