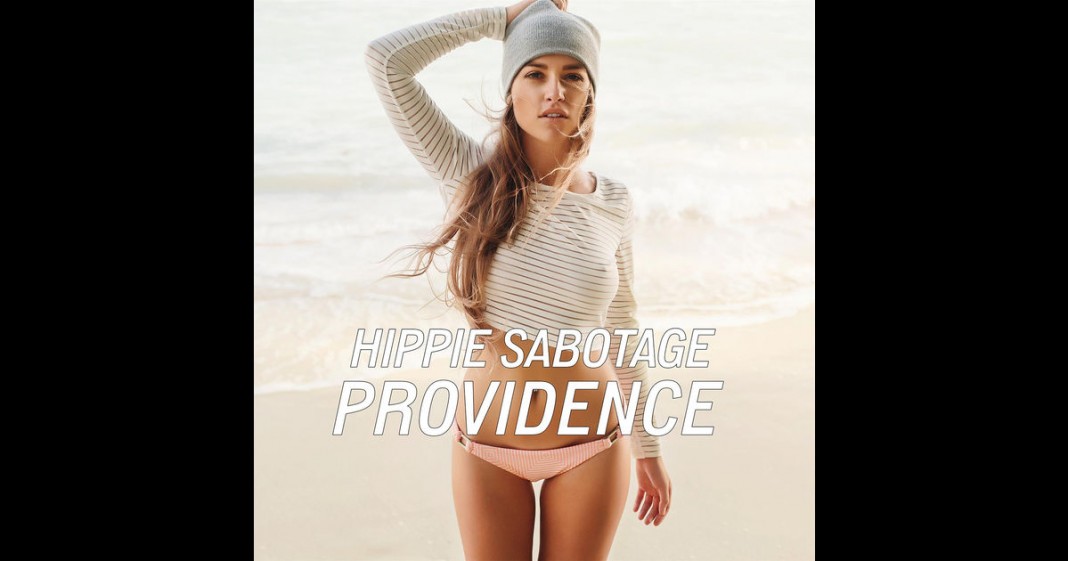 Dim the lights, set the mood and prepare to zone out to Hippie Sabotage’s latest album, “Providence”.

When I first listened to the 11 track release, I was taken aback by the lack of vocals throughout. As much as I love beats, nothing compares to a sing-along. Only a few of the songs contain vocals and I was surprised because this is inconsistent with other Hippie Sabotage albums. My surprise went away after realizing that all of Hippie Sabotage’s albums are different and that actually, none of them have a super similar sound. It is hard to classify Hippie Sabotage in one specific genre; maybe inconsistency is their thing.

After I got over my ‘lack of vocals’ shock, I started to really enjoy “Providence.” Just like how the album is different from Hippie Sabotage’s other releases, each track on “Providence” is unique as well. Every song on the album has its own individual feel and vibe. When you take a look at them as a whole, however, together they tell a story. Hippie Sabotage brings their listeners on a journey.

The beginning track, “Glimpse,” seemingly gives a ‘glimpse’ or preview of what’s to come in the rest of the album. This intro song is semi-slow, but upbeat. It is sort of a middle ground tempo to draw the listener in, but not bore them or pump them up too early. There is no big drop, but “Glimpse” has a great electronic beat to vibe along to.

Keeping with the slightly upbeat pace from “Glimpse,” “Please Understand” has subtle bass drops and a chill ass beat. It wasn’t until the third or fourth time listening to this song that I realized ‘please understand’ was being said in the background.

“Gold” is my one of my favorite songs on the album and also just so happens to be the first song with true vocals. The amount of vocals on this track most likely has to do with the fact that it is not a Hippie Sabotage original but a remade, sped up version of “Gold” by Kiiara. Hippie Sabotage kills it, though, and when the bass starts bumping in the background (Who doesn’t love bass?!) Kiiara’s song is taken to a whole new level. Towards the end of the song, you begin to hear raindrops which transitions into…

Just like how a rainy day is slow, a little dreary and mellow, “The Rainy Season” slows the pace down after “Gold” and cools you down. Wind can be heard blowing in the background but besides that, the song features electronic sounds and a few instruments. “The Rainy Season” has rainy day vibes for sure.

“Waiting” is like the calm after the storm. The sound of storm clouds can be heard in the beginning and the light ‘tap tap’ of rain coming to a halt is featured throughout. The storm is over, but you are still waiting for sunny days. “Waiting” has chill, moody vibes and is the longest song on the album. All of the other songs on “Providence” are short, and to be honest I found myself ‘waiting’ for this song to end.

This is the second song featuring vocals and another album favorite. After listening to “Waiting,” “Devil Eyes” seems extremely short. In fact, it is less than half the length of the previous song. I found myself hitting repeat because I wasn’t ready for it to end. “Devil Eyes” has great bass and picks up the pace of the album.

“Hidden Places” is a song you can’t help but nod your head along to. No vocals, but the sound is smooth, upbeat and hypnotic. I imagine “Hidden Places” as the soundtrack to a drive in a convertible, while you cruise down L.A. streets chasing the sunset.

I feel as though this song is the change from evening to night.  The tempo switches up a little and again, I want to say that the sound is smooth because I can’t think of a better way to describe it. “Not Enough” is the perfect transition from “Hidden Places” to my number one “Providence” favorite, “Feeling Crazy.”

“Feeling Crazy” has an old school, hip-hop vibe thanks to the “Look What You’ve Done” by Al Green sample that is featured. Can I use the word ‘smooth’ one last time to describe “Feeling Crazy,” along with ‘oh so sexy!’? Halfway through the song, the bass drops and the old school vibes switch to trap vibes. It’s night time now, and you’re out on the town.

The pace slows down a bit and “Moments” gives off a dark, 2 a.m. vibe. “Feeling Crazy” was the club and “Moments” is the creepy walk home at night. This song captures the late night feeling of darkness and the creepiness of the night.

Although the walk home was a little shady, you make it home safe, lay down, and enter the dream world. Even though there are no vocals, this song is another one of my favorites. “Lay Down” is a good vibes way to end the album.

You can follow Hippie Sabotage on their social links below:

Borgeous – They Don’t Know Us